Kinkakuji (金閣寺) is one of the many top tourist attractions in Kyoto. This Zen temple is 3 storey high with the top 2 covered with gold leaf, making it an absolute beauty together with the surrounding pond and greenery.

We visited Kinkakuji on a sunny summer day using the Kyoto area pass that allow unlimited rides on the local buses. Unknowingly, we actually got off at a wrong stop and went to Ginkakuji (銀閣寺, Silver Pavilion), another Zen temple in the Kyoto area that is also popular among tourists. However we did not spend much time at Ginkakuji as our target was the Golden Pavilion.

Finally arriving at Kinkakuji, we were surprised to see a sea of people, most of them tourists. After paying 400 admission fee and getting an amulet-like ticket, we joined the slow moving queue towards the pond area where the fame temple is. Under the bright sun light, the shining Golden Pavilion is an impressive structure built overlooking a pond full of Zen style. The best photo taking spot is across the pond, but it was a difficult task with the hordes of tourists dangerously using their selfie sticks. Fortunately, it was not possible to enter the temple, you never know what damage the thousands of daily visitors can do to this UNESCO World Heritage building.

Surrounding the pond and temple were many greenery including some bonsai looking trees. After seeing the Kinkakuji and following the crowd, we pass by another big temple which is supposedly the living quarters for the priests. A pity the area was closed to public. The garden look really nice and we were hoping to tour the inside too. 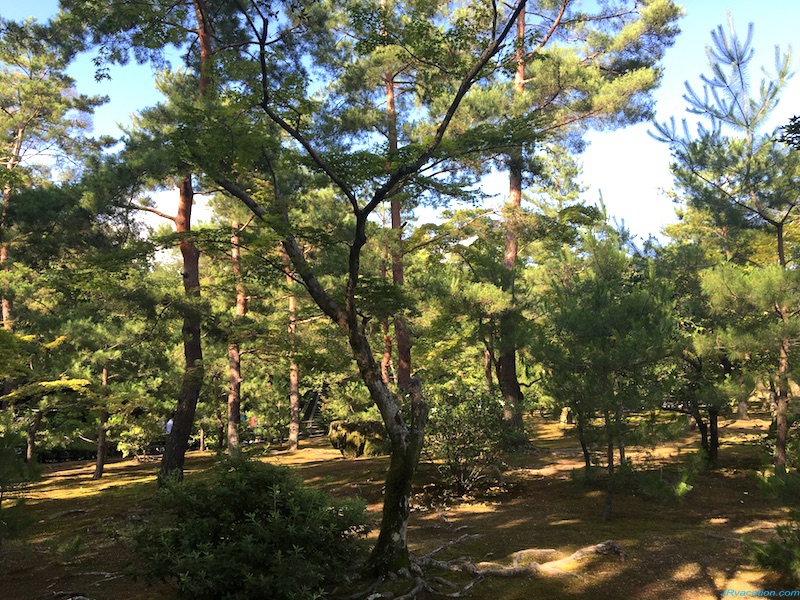 There are some small shops selling green tea and ice cream, we bought some and enjoyed at one of the resting area. Souvenir shops are found outside the paid area, and there were more stone statues that were created by famous historical Japanese figures.

Kinkakuji temple is the more famous elder brother of Ginkakuji temple. And because of that, you can expect many more visitors. To avoid the crowd, try visiting it in the early morning. With the morning sun behind you, photographing the temple will also be an easier chore.