The Ampelmannchen is a famous icon of Berlin transportation system, it is a male figure wearing a hat that is very much different from the usual traffic lights you see in your country. Before 1989, the people of Germany were divided by a long wall that separates the country in the East and West. Germans from the East led a very different lifestyle compared to those in the West. After the fall of the Berlin Wall and unification of East and West, much of Berlin adopted features of the West. The Ampelmann is one of the very few features from the communist East that survived post unification. People from the East were adamant in preserving the little traffic light man that was created in the 1960s by Karl Peglau, a traffic psychologist.

The cute Ampelmann later become so popular that they were used in cartoons, games, story books and tv programmes, serving as an education for children teaching them about road safety. The Berlin Ampelmann is now a brand itself, popular with tourists like us who had heard the romantic story behind it. We visited the Ampelmann Shop Unter den Linden, a 3 minutes walk from the Brandenburg Gate.

Everything is about Ampelmann, here you can find souvenirs like cups, magnets, t-shirts, writing books, bags, shoes, and many other items. There is a small cafe within the shop too. Not all traffic lights in Berlin sports the Ampelmann. It is common to see one with Ampelmann and another traffic light with the usual boring green/red man down the next road. Another thing we noticed about traffic lights here is that the green man doesn’t blink/flash. In Singapore, the green man starts flashing, indicating pedestrians to hurry and complete the crossing. But here in Berlin (and other parts of Europe too), the green man changes to red without warning. We had to be highly alert when crossing the roads. 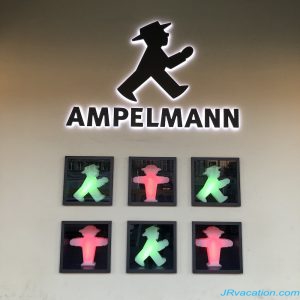 Ampelmann is a really cool icon and the story behind makes it especially memorable. Be sure to look out for it when you visit Berlin in Germany!